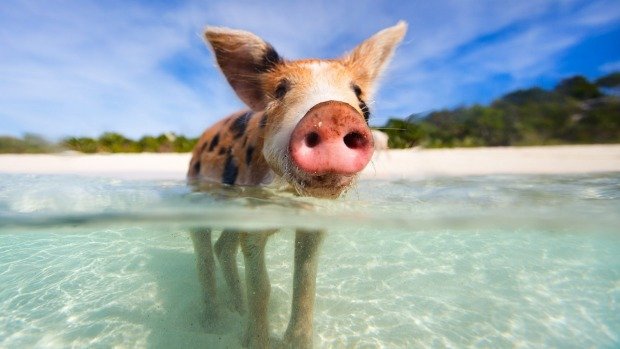 11 Of the Best Beaches in the Bahamas

It is nearly impossible to narrow down the best beaches in The Bahamas, since it seems as though every beach you come across is the most beautiful beach you’ve ever seen. After traveling the islands of The Bahamas extensively and stepping foot on beach after glorious beach, we’ve narrowed down our Top 11 favorites. We know, We know, “Top 10 Best Bahamas Beaches” sounds much more polished and rounded off, but we had a hard enough time narrowing it down to 11 as it was.

These beaches made the list due to the amenities available, a nearby resort or hotel, or their close proximity to a town or settlement. They offer powder-soft sandy bottoms and are generally calm, making them great options for families to get their little ones in the water. If you are looking to vacation in The Bahamas, you might want to take a scroll though this list and plan your crewed bahamas yacht charter around these breathtaking beaches.

So here they are…in no particular order.

TOP 11 BEST BEACHES IN THE BAHAMAS

One of the Bahamas’ top beaches can be found in the nation’s capital. The beach stretches almost the entire length of the northern edge of Paradise Island and can be accessed through one of the many hotels along the beach, including Atlantis, Sunrise Beach Club, The Ocean Club, and a few public accesses. If you are closer to Atlantis you can engage in water sports and parasailing along with crowds of other people and vendors trying to sell their wares. Further east on the beach, closer to The Ocean Club (now a Four Seasons Resort), the quieter it will become. For a spiritual retreat visit the Sivananda Ashram to the west of Atlantis.

Considered not only to be one of the best beaches in the Bahamas, but also the entire Caribbean, and at three and a half glorious miles long, Treasure Cay Beach has won awards in honor of its unabashed allure. The beach itself resembles a white, wind-blown mountain covered in snow, but you’ll be hard-pressed to feel the bite of winter once you gaze at the shimmering, shallow expanse of turquoise/blue water and its inviting soft sandy bottom. On a windy day the sand blows like powder and kiteboarders rush out to perform for a captive audience of beach-goers and bar patrons. On breathless, windless days, you couldn’t imagine a more perfect beach for taking an afternoon swim. Located along the beach is the Treasure Cay Resort, including Coco Beach Bar, the Bahama Beach Club, and private homes. At the very northwest end is Treasure Sands Club. To plan your escape to Abaco Island, read our Abaco Islands Itinerary

The name Tahiti Beach instills images of swaying coconut palms in an exotic locale in the South Pacific. The beach on Elbow Cay with this namesake was not accidental. This particular beach, out of all the glorious beaches in The Bahamas, is one most resembling a faraway tropical isle. A sandy beach slinks around a curvy point, and into a protected bay. At its apex it reaches out into the protected harbour, giving it a lagoon-inspired castaway island feel. The beach itself is beautiful at any tide, but for a truly mind-blowing backdrop to your beach day make sure you are there for low tide when an expansive sandbar is exposed, which drops off into deeper water. Although there are no beach bars along this residential stretch, keep your eye out for the Thirsty Cuda Bar & Grill, a floating bar(ge) that drops anchor, awaiting your soggy dollar to purchase cold beers, cocktails or nibbles.

At the northwestern side of Long Island is Cape Santa Maria Beach, named for one of Christopher Columbus’ ships. Soft, powdery sand stretches for four miles. The Cape Santa Maria Resort borders the northern edge, just before it tucks into inland shallows and protected sandbars and creeks, teeming with bonefish. To visit the beach, consider dining at Cape Santa Maria Resort, located just steps from the sand. Beach chairs with shady umbrellas are tucked within palm fronds and edged with bright green scaevola. The water gently laps onto the shore in most weather conditions, but on a calm day, you’ll truly be swayed into believing you’ve reached heaven.

Eleuthera is home to a plethora of gorgeous pink sandy beaches, and you would be hard pressed to put one upon a pedestal above another because they each offer their own striking beauty. But Pink Sands Beach is slightly different and perhaps has a certain leg up if only because it’s located among the opulence of Harbour Island. Stretching for 3 miles with a width of 100-250ft depending on the tide, this is one you’ll definitely want to take a stroll on. Located along the beach are resorts, restaurants and vacation rental homes. At low tide the sand is firm and level, allowing for stable walking conditions. Some of the resorts even have fat-tired beach bicycles for proper beach cruising. To the north end of the beach are the estate homes of The Narrows, where the elite enjoy a quiet stretch of beach, lightly trafficked by beach walkers. Central are a collection of boutique resorts with oceanside dining options, and to the south are vacation rental homes that are tucked among vibrant green scaevola and broad-leafed seagrapes, which thrive in the otherwise harsh coastal conditions.

Guana Cay Beach seems to check all the boxes for top beach criteria, including a sense of seclusion, extensive length (it’s 2 miles long), where you can enjoy tootling around in a golf cart on this extremely low key island. There’s zero high rise development, and a stellar beach bar (Nipper’s). At low tide on a calm day, the water at Guana Cay Beach just seems to glow, and dark coral heads are evident, allowing you to don your snorkel gear and bee-line it straight towards one for a snoop around. There’s usually action going on in front of Nippers, but walk in any direction and you’ll likely only pass one or two other people.

If you’re visiting Stocking Island, you must go beach hopping. Stocking Island’s gorgeous powdery Ocean Beach stretches for 2 miles on the east side of the island. On the north and south ends of the island, dramatic cliffs drop abruptly into the Exuma Sound and along the center of the island grassy headlands slope gently onto the beaches below. A reef system protects the wild waves from crashing too heavily onto the seashore, and on calm days, you’ll find the ocean side to be just as tranquil as Elizabeth Harbour. There are plenty of walking trails on the island, leading you to the ocean side, including Treasure Trail traversing across the island from just south of Lumina Point and Ocean Beach Path, that pops over the hill from Turtle Lagoon. On the west side is Hamburger Beach, a small crescent beach, and further north is Starfish Beach known for the red starfish, some measuring upwards of 12 inches. The Chat N’ Chill Beach is a curved sandbar beach marking the entrance to a lagoon, within already protected Elizabeth Harbour and is the hub of action for sailboaters in the area.

If you’re looking for solitude, this is your beach. Head south from Bullock’s Harbour on Great Harbour Cay and you’ll eventually hit a dirt road. The beach access to Shelling Beach (also called Sand Dollar Beach by locals because of the large number of sand dollars to be found) is evident in a clearing among casuarinas. Make sure you head there for low tide to catch the shallow sand flats and amazing photo opportunities. You’ll be hard-pressed to come across another person, so it’s a great spot to have your chef organize a romantic picnic lunch.

Fernandez Bay Beach is located centrally on Cat Island, just north of New Bight. Visitors of Fernandez Bay Village venture out of their rooms after a day in the sun, cocktail in hand, to enjoy the sunset views over the water.  The soft, sandy bottom beckons you for a swim or for a kayak excursion. The beach is crescent shaped with a little rocky hook at the north side and along with its location in the middle of the island, prevents the beach from being exposed to swell.  Although the Green Flash isn’t common throughout The Bahamas, it has been known to be seen from this location.

At low tide Fortune Beach is a shallow sandbar, perfect for those with little ones who can safely splash in the warm sea. You will be able to find a quiet stretch anywhere along the beach, but if you are looking for a little more action, stop in at Banana Bay for lunch and a speciality cocktail.

This beach has nothing in the way of amenities, resorts or beach bars, but it’s a symbolic point of officially entering the tropics, and it’s not too bad to look at to boot. The Tropic of Cancer is the most northerly circle of latitude on the planet that the sun can be directly overhead. This happens on the June solstice, when the Northern Hemisphere is tilted toward the sun. South of that line between the Tropic of Cancer and Capricorn are the tropical zones. The Tropic of Cancer runs directly through the Tropic of Cancer Beach, also lesser known as Pelican Beach, in Little Exuma. It’s a popular stop off for visitors and is the location of filming of the first Pirates of the Caribbean.