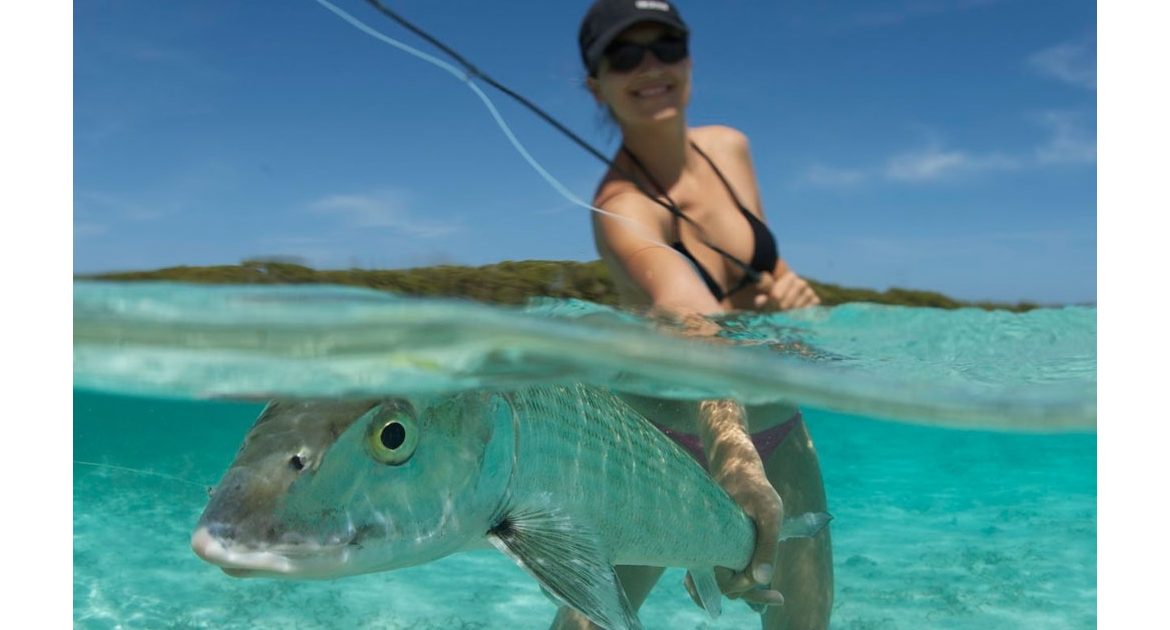 Fishing in the Bahamas

Fishing in the Bahamas is a rite of passage for any ambitious angler. Picture yourself poling across gin-clear flats just one cast away from a potential world record. Imagine big game battles on the high seas with a tropical paradise as your backdrop. Now think how it feels to do all that and more in a single day. That’s what’s waiting for you on this stunning island chain.

Those are some mighty fine words, and they’re easy to back up. The Bahamas are home to hundreds of world records for dozens of different species. Sportfishing brings in an incredible $500 million every year. Safe to say, the fishing here’s pretty good. In this article, we’ll cover just what makes it special, and how to make the most of your time in angling heaven.

We’ve talked up the Bahamas enough, time to get stuck into what exactly you can catch here. And where better to start than the fish that put the Bahamas on the map? We give you the mighty Bonefish.

Bonefish may not look like much to the uninitiated, but they’re one of the hardest challenges an angler can face. Tough to trick. Impossible to spot. They spook at the first sign of danger and hit 40 miles per hour as they escape across the flats. Catching one requires patience, precision, and a few prayers to the fisher gods. Small wonder Bonefish drive some anglers to obsession.

If that sounds like your idea of fun, you may want to save yourself the cost of flights and just straight up move to the Bahamas. The country’s clear, sandy flats are the perfect breeding ground for super-sized fish. Five-pound “Ghosts” are the norm here, and more than a few fish have made it into the record books over the years.

When and Where to Fish the Bahamian Flats

Let’s make one thing clear from the get-go: There’s no bad time to go flats fishing in the Bahamas, it’s just even better than usual during some parts of the year. Bonefish are at their very best from October–May, when the waters are cooler and the weather is dry. This is also a great time to target other inshore game fish like Permit and Tarpon.

Now that you’ve got your dates sorted, it’s time to pick an island. Again, you can’t go wrong with any of them, but a few spots do take things to the next level. One of the best places to start is Andros, the so-called “Bonefish Capital of the World.” This is the largest island in the chain, and its southern flats are said to hold the largest Bones in the Bahamas.

Don’t limit yourself to one island, though. Bimini, New Providence, Exuma, and Green Turtle Cay all have outstanding flats fishing, as do hundreds of lesser-known islands. It comes down to how good the local guides are as much as the waters themselves.

Some sharp readers may have seen this title and thought, “That’s wrong – the Bahamian flag is blue, black, and yellow!” Congratulations on your expert flag knowledge. However there are three colors that matter in the Bahamian deep sea fishing scene, with three fish to match: Blue Marlin, White Marlin, and Yellowfin Tuna.

The Bahamas used to be famous for their Bluefin bite, but in recent years, it’s the Yellowfin that have been making the headlines. This is thanks both to their size and their sheer numbers. Imagine strike after strike from big, mean, colorful fish. Then imagine the feast at the end of the day. It’s not hard to see why they’re so popular.

If you’re after the heart and soul of the Bahamas’ big game scene, you’ve got to go after the Billfish. White Marlin weighing almost 150 pounds have been caught here in the past. The Blue Marlin bite is so good that they’ve put them on the country’s coat of arms and currency.

Still not enough for you? Don’t worry – these are just the A-listers. You’ll also be battling Mahi Mahi by the dozen and some of the biggest Wahoo you’re ever likely to find. Then there’s the Bigeye and Blackfin Tuna, Sailfish, Sharks – you get the picture, there’s a lot hiding in these deep waters.

The great thing about big game fishing in the Bahamas is that all the fish are around at the same time. Visit in the spring or early summer for the full onslaught of Tuna, Marlin, Sailfish, and more. The only exception is Wahoo, which always seem to do their own thing. These guys peak in the winter and move off just as the rest of the gang rolls into town.

In an archipelago of over 700 islands, picking one spot will always be the tough part. The waters around Bimini are a great place to start. Remember all those records set in the Bahamas? Most of them were set here, and yes, many of them were set for Marlin. In fact, the Billfish bite is so good that people regularly travel by boat from Florida just to get in on the action.

Farther North, the canyons offshore from Freeport on Grand Bahama Island are a serious Yellowfin hotspot, as is the Channel, a huge, underwater valley between Great Abaco and the Berry Islands. In the south, the Exuma Trough between Exuma and Cat Island is an awesome spot.

And then we have the Tongue of the Ocean. Often shortened to TOTO, this is a long trench of deep water between Andros and Nassau. It’s completely sheltered by reefs and shoals. This means that when the high winds whip the water into a frenzy elsewhere, TOTO keeps putting huge fish on your hooks.

Reeling in a Feast: Reef Fishing in the Bahamas

So the flats are a fly fisher’s paradise and the bluewaters are a big game battlefield, but what if you just want to reel in something tasty for dinner? As always, the Bahamas have everything you could ask for and more.

Reef fishing is fun in the Bahamas because there are so many ways to work one spot. Start by going after Yellowtail Snapper near the surface. After that, you can switch to bottom fishing for Grouper. Finish it all off with a King and Cero Mackerel combo. Not bad, right? Well, that’s just the tip of the iceberg.

Depending on the depth you fish, you stand a chance of reeling in Red, Strawberry (Red Hind), Yellowfin, and Black Grouper. And that’s just the Groupers. You can also catch Yellowtail, Yelloweye, Queen, Mutton, and Mangrove Snapper, as well as Triggerfish, Hogfish, Amberjack, and African Pompano. Talk about a feast!

Another species you may come across is the Nassau Grouper. These guys are big, strong, and highly intelligent, On top of that, they taste delicious. However, they’re actually critically endangered, so we would recommend releasing them whenever possible. You’re not going to be short on fish, after all.

Best Bahamian Reefs and When to Fish Them

Spring and summer are the most active times on the Bahamian reefs. The water is warmer and the fish are more aggressive. However, you can find big fish even in the depths of winter. As we keep saying, there’s never a bad time to go fishing in the Bahamas.

The biggest reef in the country is Andros Barrier Reef. At 190 miles long, it’s actually the third largest barrier reef in the world. These sprawling corals are home to the entire food chain, from small tropical fish and Lobster up to massive Manta Rays and Marlin.

Andros Barrier Reef is the most notable spot, but it’s hardly the only place to fish. From Walker’s Cay in the northwest to Crooked Island in the southeast, the entire chain has great reef fishing. The best part? Most reefs are just a mile or two from shore, meaning you can easily combine them with inshore or deep sea action.

If you were looking for a quiet, unspoiled fishing spot, the Bahamas might not be the first name that pops up in your head. Decades of mass tourism have probably polluted the once-peaceful waters and depleted the fish stocks, right? Wrong.

The fishing in the Bahamas is still incredible. New fishing lodges and sportfishing hotspots pop up every year. New records are caught all the time. It seems like we’re still scratching the surface of what this scattered island country has to offer.

How’s that possible? For starters, the Bahamas are huge. There are more than 700 islands, and only a small portion of them are inhabited. On top of that, the country has strict rules in place to protect its fisheries. Long story short, the Bahamas aren’t what they once were – years of tourism have made them into something even more satisfying for the traveling angler.

You can start your Bahamas fishing vacation with a Yacht in Florida, or a Bahamas Yacht Charter