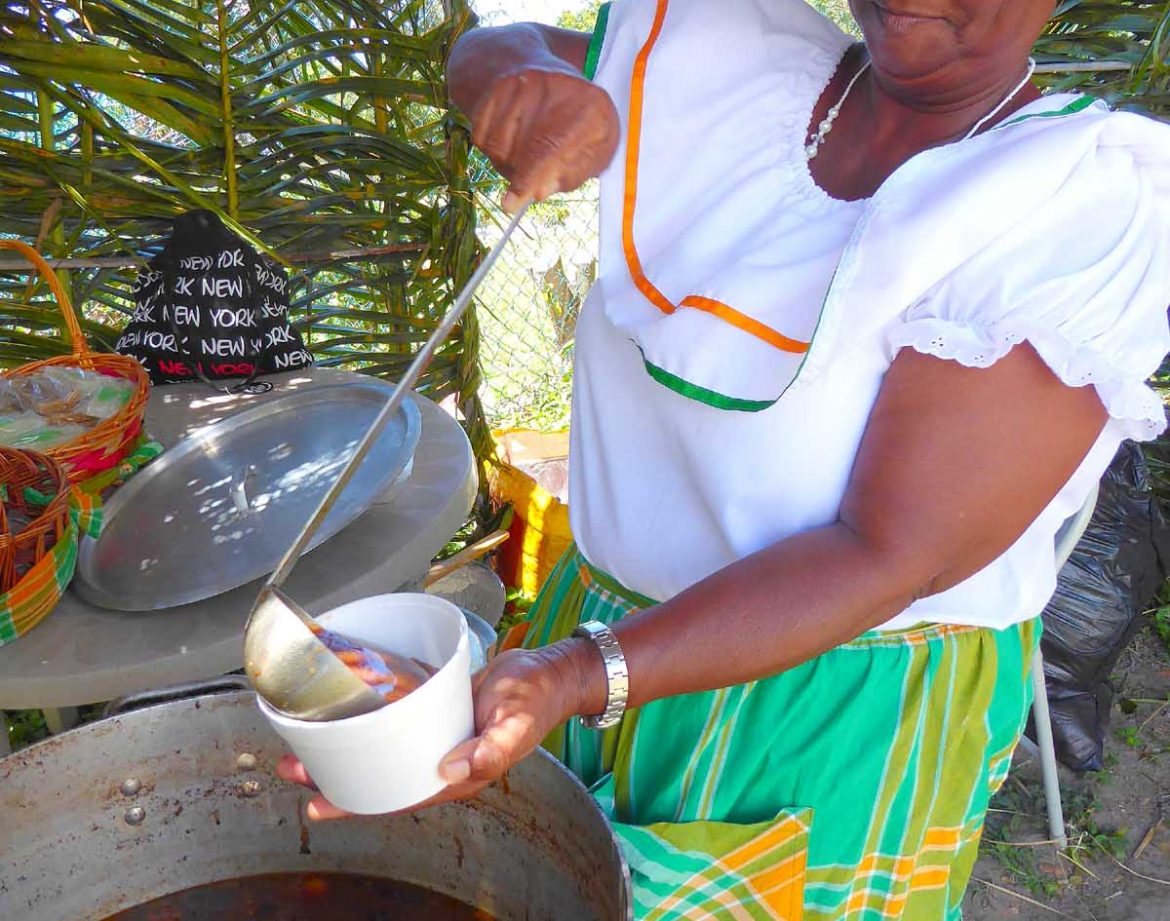 Notable Specialty Foods and Drinks of the Caribbean (J-P)

This is the fourth in a series of articles celebrating the unique culinary specialties of the Caribbean Islands.
The islands of the Caribbean have storied pasts and while there are similarities, each island
nation is influenced by the distinctive cultures that are part of its history. Because of the diverse
groups of people who settled there, each island of this region has a unique history and culture
that influences the cuisine. Since chartering a yacht is an adventure, why not be an
adventurous diner and sample some of the extraordinary local dishes that celebrate your
charter destination’s uniqueness.

Jamaica
In spite of being occupied by both the Spanish and the British, Jamaica retained its endemic
name of Xaymaca, although its culture and culinary influences are a blend of mainly African
and European traditions with some Far Eastern integration as well. Jamaica is commonly
known for its jerk chicken, rum and reggae music. The national motto, “Out of Many, One
People,” is an excellent description of Jamaicans and their cuisine.
Jamaicans often eat similar foods at all three meals and their national dish ackee and saltfish,
is commonly served for breakfast with a side of breadfruit. Ackee is a fruit imported from
Ghana that is the size of a pear and once prepared resembles scrambled eggs. Saltfish or
codfish that is boiled to remove some of the saltiness is then sautéed with green peppers,
onions and other vegetables and served alongside the ackee.
Jerk dishes, while popular throughout the Caribbean, originated in Jamaica. This very spicy
method for preparing meats involves several steps including marinating or dry rubbing the
meat with a blend of aromatic spices like ginger, garlic, cloves, and cinnamon along with
vibrant scotch bonnet and piment peppers. After allowing the meat to absorb the flavors, it is
grilled on a fire over hot coals very slowly. Most common in Jamaica is jerk chicken or jerk goat
and this piquant dish can be found on the menus of fine dining establishments as well as being
cooked over a steel drum by the roadside.
For side dishes, most entrees are served with rice and peas (red kidney beans) cooked with a
variety of spices in coconut milk.

Fesitvals are the Jamaican version of hushpuppies and are
often served aside fish dishes. Bammy is a side dish served throughout the day and is made
with cassava root dipped in coconut milk and deep fried. If your meal comes with Fish Tea
don’t cringe, this is a spicy fish soup that is said to be energizing and is a blend of doctor fish,
vegetables and green bananas.
To tame your tongue after all of the spiciness of Jamaican foods, try a refreshing Ting, a natural
grapefruit soda that originated in Jamaica in the early seventies and is popular all over the
Caribbean. You can now also buy this popular soda and mixer in the States. If you are wanting
something a little more potent, imbibe in one of the most popular drinks in Jamaica, Red Stripe
Beer. While you can drink a Jamaican made Red Stripe anywhere, in Jamaica you can enjoy a
ginger, apple, sorrel or lime flavored version. For another uniquely Jamaican beer based
beverage, sip on a Guinness Punch, made with the stiff Irish stout, condensed milk, oats, and
nutmeg.

If you desire something even more robust, try one of the incredible rum concoctions made
using the smooth dark Appelton Estate Rum or the butt-kicking Wray and Nephew White
Overproof Rum. Some of the more exotic cocktails are the Bob Marley, made with equal parts
strawberry syrup, crème de banana, crème de menthe and the overproof rum, or the Jamaican
Bobsled which blends vodka and rum with banana schnapps. For something just as powerful but not as peculiar, sip on a delicious rum punch made with a blend of Jamaican rums and
tropical juices.

Martinique
Located in the southeastern Caribbean Sea, the unpretentious Island of Martinique is an
overseas region of France and its residents are French citizens with cultural ties to both French
colonial and African slave histories. Similar to Guadeloupe, Martinican cuisine is a blend of
French and Creole styles including mainly seafood and shellfish prepared with a liberal dose of
piment peppers.
The national dish of Martinique, court-bouillon, is a prime example of this style of cuisine and is
typically made using fresh red snapper sautéed with chives, diced tomatoes, garlic, thyme,
parsley, and peppers.

Another traditional dish of Martinique is ti nain morue, combining dried
codfish and boiled green bananas finished with a vinaigrette sauce. Other notable delicacies
include Chatrou, a small octopus that is popular in Martinique and La Matautou de Crabe, a
holiday dish that utilizes crabs that are kept for a few weeks and fed spices and vegetables
before being cooked while stuffed with rice, onions, tomatoes, chives, and spices.

Noteworthy sweets are blanc manger au coco, a traditional gelatin dessert with coconut milk, vanilla
powder, sugar, cinnamon and lime juice whipped into a creamy paste and chilled; and
Chocolate Elot, a creamy bar made with all natural ingredients from Martinique including island
grown cocoa beans, vanilla beans and brown cane sugar.
Recently, many young Martinicans hoping to showcase their heritage are pursuing ways to
preserve their ethnical identities through cuisine by opening world-class restaurants and
offering cooking classes. If you would like to be more involved in the emerging cuisine of
Martinique by participating in culinary heritage workshops, look into opportunities with Les
Ateliers Médélices and La Mauny Distillery.

Montserrat
An overseas British Territory in the Lesser Antilles, Montserrat is a craggy volcanic island that
was tragically damaged and its population cut in half because of a volcanic eruption in the mid
1990s. During the eruption, the capital port city of Plymouth was destroyed and the economy
and agricultural land was battered, but with the aide of Britain and Canada they have rebuilt a
portion of the island’s infrastructure. However, there are still limited choices for traditional
meals on this island.
A blend of African, Irish and British heritage, the Montserratians are a resilient group who are
dedicated to their families. Food is an important part of daily life and with limited local
ingredients, their cuisine can be quite creative. An essential meal of celebrations and social
functions, the national dish also served in most cafes, is a hearty spicy stew utilizing fresh goat
meat, lemon, brown sugar, cloves, piment peppers, mace, thyme, garlic, onion, bay leaves,
scotch bonnet peppers, a dash or rum, and a dark brown gravy. With the nondescriptive name
of goat water, this traditional dish resembles Irish Stew and demonstrates the influence of both
British and African ancestors.

Other notable specialties of Montserrat are mountain chicken**,
which is really frog legs from a large species inhabiting the island, pumpkin soup, and
aubergine (eggplant) patties.
**It is important to note another recent devastating event on Montserrat that impacted the now
critically endangered mountain-chicken frogs. A deadly fungus attacked the amphibians and
decimated the population by 90% so that is yet another food staple that is lost to the
Montserratians at this time.

Puerto Rico
The vibrant island of Puerto Rico in the northern Caribbean is an unincorporated United States
territory with a rich cultural history and amazing culinary offerings. As is the case in many of the
Caribbean Islands in this series, the cuisine of this island is influenced by a combination of the
Arawaks, Africans, and Spanish, but Puerto Rican cooking is more heavily influenced by
Spanish flavors and also United States culture.
The indigenous influences include the use of yucca, casabe (a flatbread made with yucca flour),
maize, beans, and other fruits and vegetables. Historically, fish and shellfish were the main
protein sources until the Spanish colonized the island and introduced cattle and swine. The
Spaniards also brought along bananas, coffee, sugarcane, mangoes, tamarind, and plantains.
African influences include okra and several methods for preparation such as pounding and
grating foods. When the US came to Puerto Rico they introduced processed foods such as
Vienna sausages, Spam, oatmeal and dried milk; however, the Puerto Ricans have
incorporated these less flavorful ingredients into some deliciously fused dishes.

Beginning with the national dish, arroz con gandules and pernil incorporates some of the most
common Puerto Rican ingredients into a savory meal that is a part of most celebrations.
Translated, this dish consists of rice and pigeon peas cooked in a traditional cast iron dutch
oven or caldero, giving the rice its fluffiness, then mixed with sofrito and served with slow
roasted pork shoulder known as pernil. This meal takes many hours to prepare which
enhances both the flavors and the enjoyment. Sofrito is a fragrant sauce base made by
sautéing garlic, onion, peppers, and cilantro in olive oil colored with annatto seeds and is a key
ingredient in many Puerto Rican dishes.

A few other notable Puerto Rican specially dishes include mofongo, pastels, and arañitas.
Mofongo is a very popular dish in Puerto Rico and can be found on most menus, although the
combinations are varied. Made by utilizing the African ancestral pounding method, fried unripe
plantains are smashed with salt, garlic, and chicharron and served with meat or seafood and a
savory broth that is absorbed by the mofongo. Pasteles are believed to have originated with
with the indigenous Taino Indians and are meat pies encased in masa dough and wrapped in a
banana leaf. The options for this rectangular pie are many as fillings include pork or chicken
and the dough can be formed with cassava, taro, potatoes, or green bananas. Arañitas also
incorporate a traditional technique of grating plantains and then frying them into crispy golden
bites. Served with guacamole or garlic dipping sauces, this side dish whose name means little
spiders, is a very popular accompaniment or appetizer.

To enhance your victual experience in Puerto Rico, there are several notable cocktails that are
part of the heritage of this island. The Pina Colada originated in Puerto Rico and this national
drink has become popular world-wide. For a less refined cocktail, try a pitorro, considered a
sort of Puerto Rican moonshine distilled from sugarcane and molasses and served neat, or
incorporated into a Coquito. The Coquito is a traditional mixture similar to eggnog and is also
served during the holidays. Made with coconut milk, rum, condensed milk, and vanilla with
nutmeg grated on top, this rich cocktail is served chilled in small glasses. If shooters are a part
of your celebration, try a chichaito, a shot made with Palo Viejo rum and anisette or any one of
the variations.
If beer is more your speed, Medalla Light lager is the only large production beer brewed in
Puerto Rico but there are several craft options including selections from Old Harbor Brewery,
Magna Special Craft, Buye, and the newly added OceanLab, Borinquen and FOK. Keep in mind that
beers in Puerto Rico come in a variety of non-standard sizes and are served very cold.

The capital city of San Juan is a foodie town with many fine restaurants and food parks but
there are other options for culinary discoveries in more rural areas and lesser known dining
destinations. However you experience the cuisine of Puerto Rico, you will find many delicious
offerings for all palates.