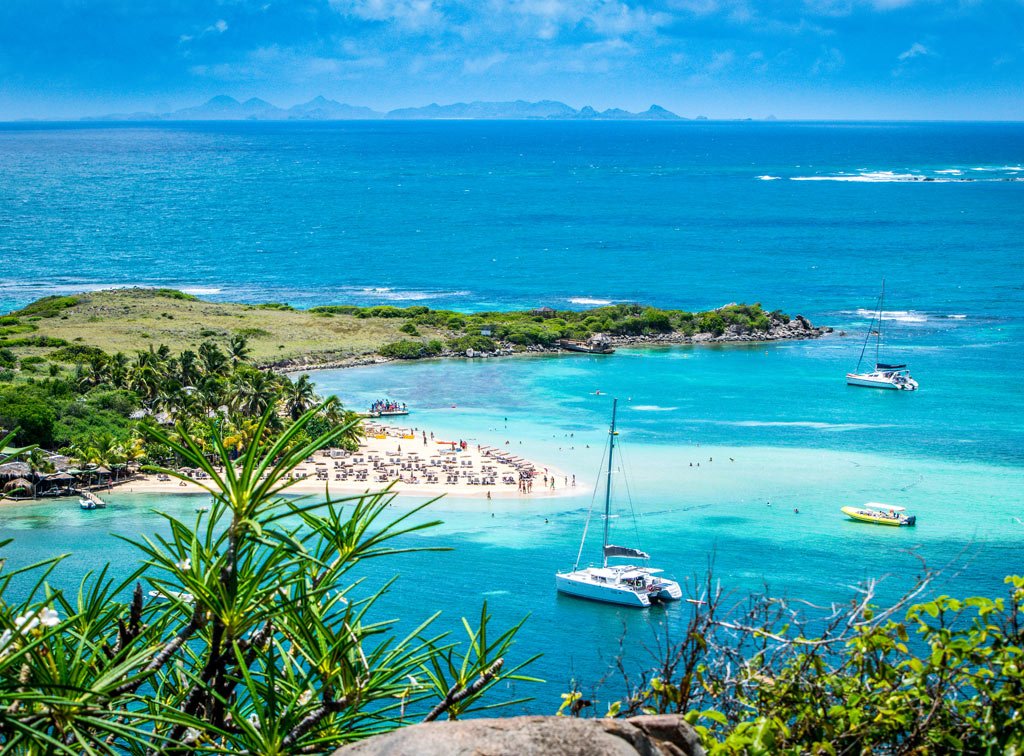 This is the seventh in a series of articles celebrating the unique culinary specialties of the Caribbean Islands.
The islands of the Caribbean have storied pasts and while there are similarities, each island
nation is influenced by the distinctive cultures that are part of its history. Because of the diverse
groups of people who settled there, each island of this region has a unique history and culture
that influences the cuisine. Since chartering a yacht is an adventure, why not be an
adventurous diner and sample some of the extraordinary local dishes that celebrate your
charter destination’s uniqueness.

St. Lucia
The West Indian nation of St. Lucia is a diverse island that shares similar histories with its close
neighbors. The French and British took turns ruling St. Lucia and for one tumultuous period
during the eighteenth century, power changed hands fourteen times with the British finally
maintaining control in 1814 up until 1979 when the island declared its independence.
One of the smaller volcanic islands in the Eastern Caribbean, St. Lucia is only 238 square miles
in area yet it is one of the largest exporters of bananas and tropical fruits. As many as six
unique varieties of bananas are grown on this lushly fertile island along with mangos, coconuts,
papayas, pineapples, guava, passionfruit and soursops.

Because of its access to fresh seafood and an abundant supply of tropical produce, St. Lucia
has gained international recognition for its culinary flavors and methods. St. Lucian chefs are
inspired by the sea and their Creole heritage, and are known for incorporating traditional
cooking methods utilizing clay pots over wood fires.

It should come as no surprise that the national dish of St. Lucia includes green figs which is
another name for green bananas and local salt fish (cod). The indigenous green bananas are
stewed with local peppers, onions, herbs and spices and served along side the lightly boiled
salt fish. This meal is popular for breakfast or prepared as a salad for lunch or dinner.
Other notable Creole inspired St. Lucian dishes include pemmie and avocado balls. Pemmie is
cornmeal, coconut, pumpkin, sugar, milk and spices wrapped in banana leaves and then boiled
and is enjoyed either at breakfast or as a snack. Avocado balls are made by mixing farine
(made by processing cassava root into a meal), mashed avocado, and a little vegetable oil and
rolling the mixture with a sprinkle of salt and pepper into small dough balls to be served as an
accompaniment for fish.

Specialty beverages on St. Lucia are aptly named after places of interest or important cultural
references. For example, one of the most popular beers is Piton Beer, a lager named after the
two distinct island peaks that are popular tourist attractions. Antilla Brewery also brews several
craft beers such as the Naked IPA. Local spirits include rums made by St. Lucia Distillers like
their Chairman’s Reserve, Bounty Rum, Kweyol Spice, and Crystal Lime Citrus Rum. Kweyo’l is
the Creole language that is spoken by the majority of St. Lucians.
There are numerous opportunities to experience the culture of St. Lucia because of the many
festivals and events. If you happen to be on St. Lucia in the springtime for the St. Lucia Jazz
and Arts Festival, you will have the good fortune of experiencing the celebratory spirit of St.
Lucians along with their deeply rooted love of music. If you prefer to taste the culture and be
immersed in the unique cuisine of the island, visit during the St. Lucian Rum and Food Festival
in the early fall.

St. Martin and St. Maarten
Part of the Leeward Islands, Saint Martin is one island made up of two countries, the French
controlled northern side and the southern Dutch portion overseen by The Netherlands. While
the island is dually governed, they desire to live harmoniously and residents and visitors are
free to come and go from side to side as they please. Further evidence of their unique
collaboration is that all schools throughout the island instruct students to be trilingual in Dutch,
English and French.
After many years of disputes over who would control the island of St. Martin, it was peacefully
divided between the French and the Dutch by the Treaty of Concordia in 1648. While both
countries share similar histories and cultures, there are distinct influences from the governing
countries on each side which is why some dishes are unique to either St. Martin or St. Maarten,
while others are prepared throughout the entire island.

The national dishes of each country are both heavily influenced by their Creole heritage but
enhanced by the seasonings of the governing nations. For example, the national dish of St.
Martin is callaloo soup, made with the leafy green vegetable grown throughout the Caribbean.
For this unique version, the greens are cooked with pork cubes, hot pepper, okra, black pepper
and thyme in a chicken stock, Creole with a dash of France.
In St. Maarten, the national dish is conch and dumplings made by cooking pounded seasoned
conch in a pressure cooker with dumplings made from flour and sometimes cornmeal in a hot
and spicy sauce. This dish is available all year but is most often associated with carnival which
takes place on the Dutch side of the island.

Other notable foods to taste include johnny cakes and chicken locri preferable on the French
side, as well as barbecue spare ribs, more remarkable in St. Maarten. As popular as french fries
in the USA, johnny cakes are a slightly sweet deep fried cornmeal flat bread, served as a side
dish, snack or meal. For a truly local experience try them for breakfast with some jacks, a fish
that is deep fried until it is dry and crispy. Locri is a rice and chicken dish similar to risotto
simmered in one pot with tomatoes, garlic, brown sugar, thyme, celery, onion, cabbage and hot
sauce. On the dutch side, visit one of the lolos, open air barbecue stands that slowly cook
spare ribs washed in lime and cider vinegar then marinated in a unique barbecue sauce and
roasted over an open fire.

For a noteworthy cocktail while on the island of St. Martin, try something made with the
national beverage of both countries, Guavaberry Liqueur. This elixir has been made for
centuries and has a woody, fruity, yet spicy flavor. Popular mixtures are the Guavaberry Colada,
Guavaberry Sunrise, and Guavaberry Royale, the delicious liqueur blended with chilled
champagne.
Local beers of note are brewed in St. Maarten and include San Martin Premium Beer, Dutch
Blond Ale, SCM Light, Pirate’s Edition IPA and Dark Stout 1863 brewed by Caribbean Brewing
Company. Pelikaan Brewery, the first craft brewery on the island offers up Mullet Bay Blonde,
Mont Careta Porter, Soua Liga Blonde, and Irma Pale Ale named after the hurricane that
devastated the island in 2017 while this beer was in the tanks fermenting.

Find your perfect Yacht Vacation live on our website, or send us a message for more information.