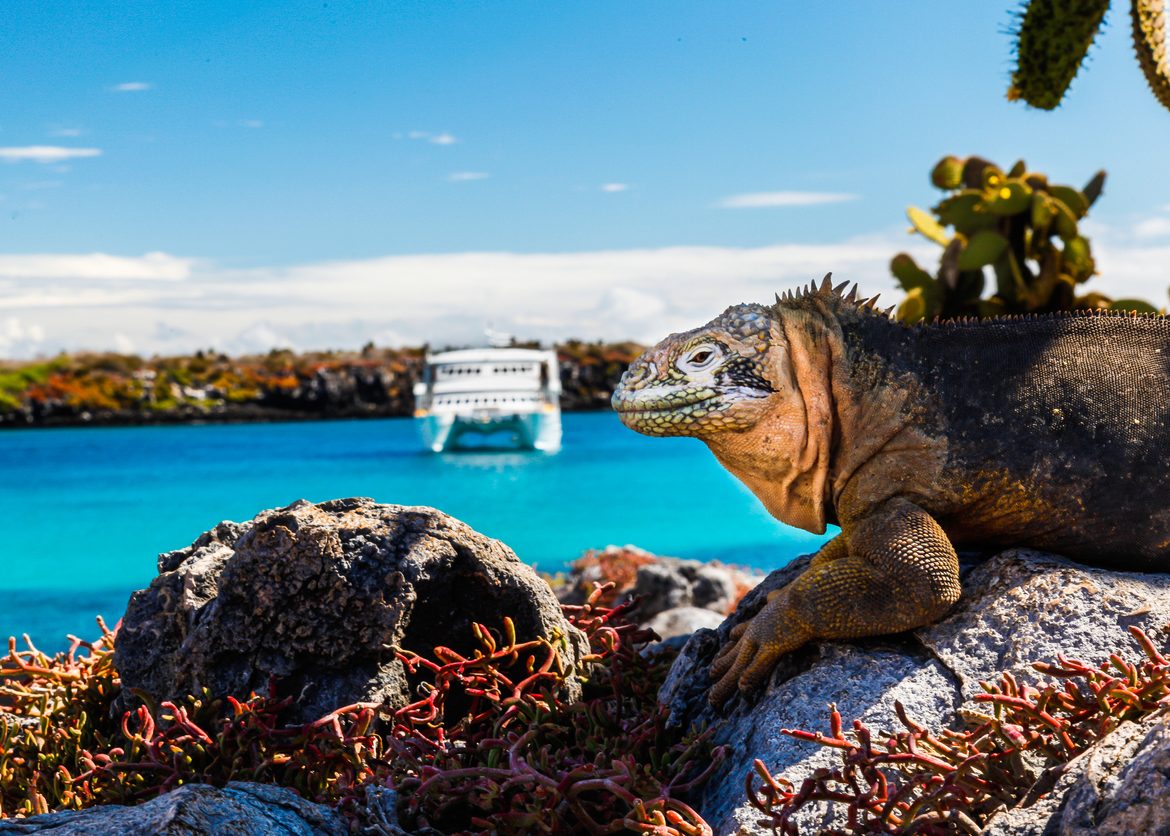 The Amazing Animals and Attractions of The Galápagos Islands

Published on January 6, 2022 by richard steele

The volcanic archipelago in the Pacific Ocean is special for several reasons; its remote location, the amazing array of plant life, and the unique animals that inhabit the Galápagos Islands. Because of its proximity to the equator yet in the path of the cool ocean currents from the Antarctic, the islands are home to a blend of tropical and temperate climates. This anomaly provides extraordinary environmental conditions, creating a diverse ecological community to support a variety of unusual species.

The isolation and unique ecosystem of the Galápagos Islands provides a remarkable setting for scientific research, particularly in the study of evolution in plants and animal species. Beginning with naturalist Charles Darwin’s 1835 expedition aboard the HMS Beagle to study the wildlife in the region, to the recent exploration by marine ecologist Salome Ursula Burglass, the islands have been the site of considerable studies involving plant and animal species both on land and underwater.

Since the Galápagos National Park has established rules and regulations allowing plants and animal species to thrive, visitors have the opportunity to get an up-close look at some of the same rare creatures as the scientists from long ago. Fortunately, today you can observe the spectacular sights as you tour the Galápagos Islands aboard the comfort of a chartered yacht. Once you have selected your yacht, you will work with a consultant to determine whether you will follow the northern or southern itinerary established by the Galápagos National Park authorities.

The northern route begins and ends on San Cristobal Island while the southern route starts and concludes on Baltra. Each island in the archipelago is home to a unique array of flora and fauna so route selection is based on what you wish to encounter on your amazing adventure. There are more than forty different landing sites within the National Park where you can spend time ashore enjoying nature. Some of the endemic animals you might encounter along either of the routes include the giant tortoise, the land iguana, marine iguana, sea turtles, sea lions, fur seals, and numerous bird species like the flightless cormorant, the frigate, the albatross, Galápagos penguins, flamingos, and the red-footed and blue-footed boobies.

Since the islands within the Galápagos National Park offer varied attractions, it helps if you are familiar with the unique features special to each of the thirteen major and seven smaller islands. It is also important to note that many of the islands are referred to with different names in both Spanish and English. For example Baltra is sometimes referred to as South Seymour, Bartolome aka Bartholomew, Darwin is also Culpepper, Espanola aka Hood, Fernandina Island also Narborough, Floreana Island aka Charles, etc.

Some interesting characteristics of each of the islands are noted below that may help you decide on your itinerary:

Baltra Island is situated in the middle of the island chain and is small, flat, and arid with cacti, salt bushes, and palo santo trees. It was not visited often until Franklin D. Roosevelt established an airbase on Baltra in the 1930s. Baltra is the site of the busiest airport in the Galápagos Islands.

Bartolome Island is one of only a few homes of the Galápagos penguins as well as the green turtle. It is also the location of Pinnacle Rock a notable volcanic cone formation made popular in the movie “Master and Commander.”

Darwin Island is the northernmost island and has amazing marine life. It is one of the most remote islands in the archipelago and is basically the top of an extinct volcano. This island does not have a landing site and is mostly a destination for experienced divers.

Espanola Island is the southernmost island with a large collection of endemic animals including lava lizards and giant tortoises. Marina iguanas and the nesting Waved Albatross also make their homes here. There are two different landings on this island; Gardner Bay has a beach with swimming and snorkeling, while Punta Suarez is where you will find the most wildlife including swallow-tailed gulls, blue-footed boobies, Nazca boobies, and other bird species.

Fernandina Island is still the site of an active volcano and is the westernmost island in the Galápagos chain. It is fed by the cold currents hitting the islands from the West so its frigid waters are perfect for flightless cormorants and Galápagos penguins. Fernandina is the third-largest island and home to mangrove forests and hundreds of land and marine iguanas.

Floreana Island is home to flamingos, green sea turtles, and many sea birds. It is the site of the first post office, established by whalers in the late eighteenth century, and also where the first resident of the Galápagos Islands, Patrick Watkins, lived. It is possibly the island most altered by human presence because of the farming practices of the residents. If you are hoping to learn about human history, which is not typically a focus of Galápagos excursions, Post Office Bay is one of a few sites that focuses on the whalers, seamen, and others who first landed in this remote locale. The four small islets of Enderby, Champion, Watson, and Gardner are a short distance from Floreana and provide access to observe sea turtles, sea lions, sharks, and other fish amongst rock outcroppings and large caves.

Isabela Island is the largest island in the archipelago at almost eighteen hundred square miles. The equator runs through Isabela, home to the third-largest settlement in the Galápagos Islands, Puerto Villamil. More tortoises live on this island than all of the other islands combined, with a different species on each of the six volcanos that make up Isabela Island. The Cromwell Current runs by the island making it a wonderful feeding ground and observational site for whales, dolphins, and birds. This is the best location in the Galápagos National Park to view some sixteen species of whales.

Marchena Island is home to the unique Marchena lava lizard and numerous fur seals that live in the rocky coves along the southern shore. There are no landing sites here but there are two dive sites teeming with sharks and other unique marine creatures.

North Seymour provides hiking options along a short trail or a longer loop where visitors can view the largest colony of frigate birds in the islands. Blue-footed boobies, land iguanas, and sea lions are also present.

Pinzón Island is surrounded by deep water and has a higher elevation than most of the other islands in the Galápagos chain. Local fishermen fish in its deep waters but there are no landing or dive sites.

Plazas consist of two islands off the eastern coast of Santa Cruz. North Plazas is only open to research expeditions but South Plazas Island has a popular landing site. Red-billed tropicbirds, swallow-tailed gulls, and land and marine iguanas abound, along with an occasionally mixed breed iguana. The island is very small and the iguanas that inhabit South Plazas are the smallest of all the Galápagos iguanas.

Rabida Island is the place to see the white-cheeked pintail ducks, nesting brown pelicans, boobies, flamingos, and nine different species of finches. The climate is arid and it has a steep rocky coastline with one small maroon-colored beach along the northeastern shore. The beach is a nice place to swim and snorkel. The unique geology from the iron in the lava making up Rabida, give it a distinctive red tint.

San Cristobal Island is named after Saint Christopher, the patron saint of seafarers. It was the first landing spot for the Charles Darwin expedition and home to many different fauna. It is also the easternmost island and where the largest freshwater lake in the Galápagos Islands is located. The capital town of Puerto Baquerizo Moreno is home to government offices and an Ecuadorian Naval base. It is the second most populated town in the Galápagos Islands. There are several landing sites on this island including Sea Lion Rookery, and the Interpretation Center that documents the history of the ecosystems in the Galápagos Islands. Frigatebird Hill is a trail leading from the interpretation center and one of the best places to observe these amazing avifauna. About an hour’s sail away is Isla Lobos, a scenic islet and home to blue-footed boobies, sea lions, and fur seals. It is also a peaceful place to snorkel. Other visitors sites on San Cristobal include Ochoa Beach, Cerro Brujo, Sapho Bay, Punta Pitt, El Junco Lagoon, Puerto Chino, and Cerro Colorado Tortoise Reserve.

Santa Cruz Island is the most populated island in the Galápagos Islands and home to the Charles Darwin Research Station in Puerto Ayora. The headquarters of the Galápagos National Park is also situated on Santa Cruz. Some of the main natural attractions of the island include the tortoises who live around the lava tunnels; mangroves, sea turtles, stingrays, and sharks that inhabit Black Turtle Cove, and the flamingos found in Cerro Dragon Lagoon. Puerto Ayora, the port town along the southern coast, is the main hub of tourism for the entire archipelago. Here you will find quaint hotels, restaurants, and service amenities like a hospital, post office, and banks. Other villages on Santa Cruz include Bellavista and Santa Rosa, both good starting points for hiking and touring the lava tunnels.

Sante Fé Island is home to one of the oldest volcanos in the region and two particular endemic species, the Santa Fe Land Iguana and the Santa Fe Rice Rat. Visitors can visit the island via a small beach in Barrington Bay where they are greeted by sea lions. There are two hiking trails that offer views of the gigantic Santa Fe Opuntia cactus as well as the Galápagos hawk and land iguanas. Santa Fe is the site of the longest-running research study on marine iguanas that has been going on for more than fifty years.

Wolf Island is another destination mostly visited by master divers as there are no landing spots for shore excursions. Great Spotted Whale Sharks are often observed in the cold waters off of Wolf Island. Additionally, the rare vampire finch can only be found here.

For more information on chartering a yacht in the Galapagos, please leave your details below: 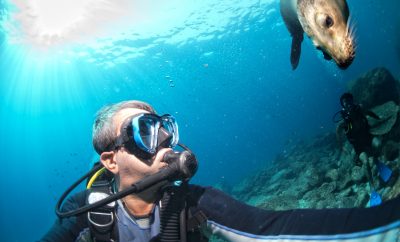 Underwater in the Enchanted ...
The Galápagos Islands are a nature lovers' dream destination. Scuba Diving here is unlike any other place on Earth and allows you to encounter a ...
Jan 06, 2022 , 0 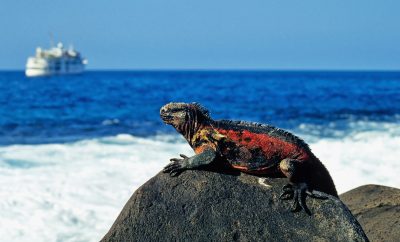