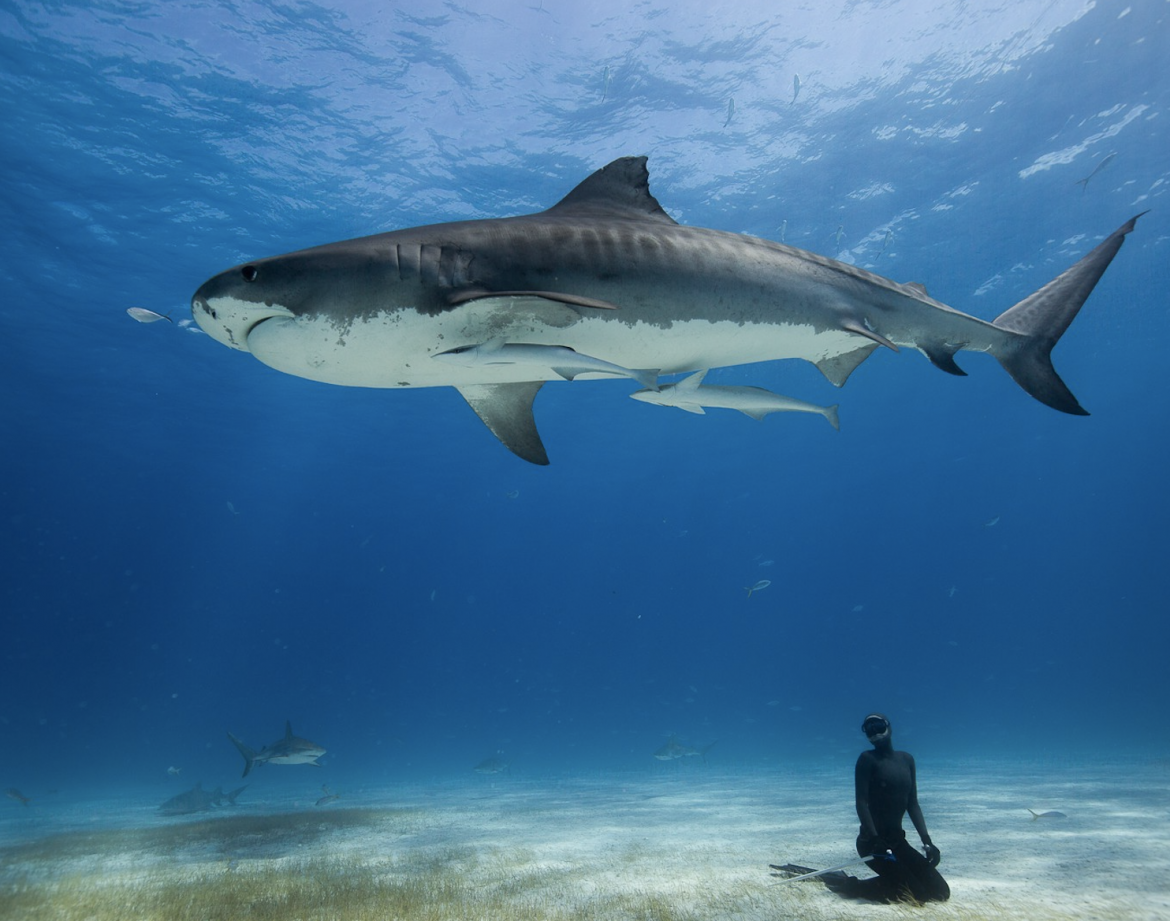 The Best Dive Sites in the Bahamas

The waters of the Bahamas are spectacular even from space, as astronaut Scott Kelly has shown in images captured from the International Space Station. But what’s below the waves is even more beautiful.

This nation of roughly 700 islands and cays sits just east of the Florida coastline, and runs north-south for roughly 600 miles. As you’d expect, the diving is spectacular, and ranges from walls to reefs to drifts. Here are 10 of the best dive sites in the Bahamas.

Off the capital island of New Providence (Nassau), divers can spend weeks exploring the many wrecks, dramatic walls and abundance of healthy reef systems. One of the most famous dive sites here is Stuart Cove’s Dive Bahamas Shark Arena, also known as Runway Wall. This dive has introduced thousands of divers from all over the world to Caribbean reef sharks, common in Bahamian waters. This incredible shark encounter gives divers the opportunity to swim with reef sharks in their natural underwater environment, followed by — for those seeking a bigger adrenaline rush — the shark-feed experience, wherein divers can get up close to these wonderful animals. As this dive site is in only 40 feet (12 m) of water, all certification levels are able to participate.

When watching the James Bond film, “Spectre”, it’s easy to look back on the Bond history in Nassau. Known as the ‘Underwater Hollywood,’ Nassau has played a big part as the backdrop for several Bond films. Diving off the southwestern end of New Providence, divers can experience their own bit of cinematic history by exploring the Vulcan Bomber from the 1965 film “Thunderball,” and the Tears of Allah shipwreck from the 1983 Bond film “Never Say Never Again.” Both flicks starred Sean Connery as the suave British agent. Apart from their starring role on the silver screen, these dive sites offer much more to all levels of divers. Found in 40 feet (12 m) of water, the coral growth creates a fantastic opportunity for photographers and videographers. The surrounding reef also supports an abundance of marine life.

As we move slightly north to the island of Eleuthera, we’ll check out Current Cut, located between Great Eleuthera Island and Current Island. The best time to dive this great site is on an incoming tide, when the tidal change forces water through the narrow opening between the islands, creating a high-speed drift dive. With a maximum depth of 60 feet (18 m), divers can enjoy watching Bahamian reefs and marine life pass by without exerting any energy. As you move through the two islands, you’ll feel the current eventually starting to subside after 20 minutes or so. Surface slowly with your surface marker buoy (SMB) deployed, then ask your captain to take you through again. You never know what you’re going to see on this high-speed roadway.

Running approximately 100 miles from Walker Cay, the northernmost island of the Bahamas, to just south of Elbow Cay in the east, is an extensive reef system. Abaco’s Sandy Cay, Fowl Cay and Pelican Cay National Parks help protect this incredible area for scuba divers and snorkelers alike. As this reef structure faces the Atlantic Ocean, plenty of nutrition comes in, providing the corals and marine life with a plentiful food source. With the deeper parts of the reef at 60 feet (18 m), divers can enjoy an extreme diversity of marine life and vegetation. With great visibility and a fixed bottom, it’s a good spot for new divers to practice their skills while the more advanced diver is given the freedom to explore the vibrant reef.

Moving to the most northwestern tip of the Bahamian chain, you’ll find Grand Bahama, specifically West End. Add a 27-mile boat journey to the north of that, and you’ll be at an underwater haven known as Tiger Beach. This area, found on the western edge of the Little Bahamas Bank, has become famous around the world for its healthy population of tiger sharks, and it’s been rated as one of the best 30-foot (9 m) dives in the world. In an area that supports a variety of shark species, the majestic tiger shark is the undisputed star here, with a backdrop of blue water and a white, sandy bottom. This dive site is not only perfect for avid photographers and videographers, but also for divers who want to add another level of shark experience to their logbook.

South and west of Grand Bahama are the ‘Islands in the Stream,’ better known as Bimini, made up of north and south islands. Bimini sits right on the edge of the Gulf Stream, which runs between the Bahamas and the east coast of Florida. Victory Reef just off Cat Cay, south of Bimini, is a 5-mile strip of reef line offering several dive spots ranging from 30 to 80 feet (9 to 24 m), thus appropriate for many experience levels. Because of the Gulf Stream location, divers can expect to see a large variety of marine life. From larger species like turtles, sharks and rays, to the vibrant reef fish that cover the corals, sponges and fans, there’s plenty of activity to keep divers busy. Visibility can be great here too, up to 100 feet (30 m).  There are also swim-throughs, small caverns and exaggerated reef structures to explore. Three of the best spots are Cathedral, Sponge Garden and Rainbow Valley.

The largest island in the Bahamas is Andros, and it belongs on every diver’s bucket list because of the abundance of ocean and inland blue holes that can be found here. Some are dived regularly; many others remain unexplored. One of the best is the Crater, an oceanic blue hole off Small Hope Bay. Divers of any level can explore its outer rim and further down into the canyon-like environment until reaching the outer walls of the blue hole and its dark edges, where only those with appropriate certification levels should venture. The Crater is unique even among blue holes because it was once the ocean floor, falling into itself when the ground gave way to erosion, opening up the cave system below. Lots of marine life calls this area home; large turtles sleep on the bottom, and eels and rays swim in and among the coral-covered walls. For more experienced divers, the edges of the wall open up to the dark cave system below.

We move from the Bahamas’ largest island to one of the nation’s most beautiful island groups, the Exumas. Made up of 350 cays and ringed by stunning beaches, waterways and reefs, the Exumas are home to the Bahamas National Trust’s Land and Sea Park. Outside the park, in the northern section of the Exuma Cays and just south of Highbourne Cay, is a site known as the Washing Machine. This fun drift dive begins in only about 15 feet (4.5 m) of water, where divers drop down to an insistent current, which picks them up and propels them, head-over-heels, through a narrow cut in the reef — hence the name “Washing Machine.” By the time the current releases divers, they’re at around 50 feet (15 m), cruising over a beautiful and colorful reef.

On the very southeastern tip of Cat Island is Columbus Point, a remote spot that juts out into the Atlantic Ocean. Because of this exposed position, the diving here tends to be more suited to advanced divers, who are comfortable in deeper waters. Underwater pinnacles come up from the ocean floor all around the point, attracting large grouper and big sharks. Currents can be strong, but when the weather cooperates, the beauty of this underwater world is breathtaking. A large population of oceanic whitetips are seasonal residents, and diving with them is another experience for the bucket list. As these sharks are pelagic, dive operators must take their guests out into the open ocean to see them. Here the only things interrupting the deep blue are the occasional large game fish swimming by, along with the oceanics and silky sharks. Columbus Point can be a challenging dive, but when the timing is right, it’s well worth it.

French Bay Wall is on the western coast of San Salvador Island, right in the middle of the Bahamas island chain. The wall is covered with dive sites, spread widely across the area. The wall here is so steep that is has a series of overhangs, undercuts and crevasses throughout. The top of the wall is at 40 feet (12 m), with visibility normally between 100 and 150 feet (30 to 45 m). A perfect spot for night dives, French Bay Wall is known for its abundant elkhorn and staghorn corals. Dive this site by swimming down the wall to about 100 feet and then taking one of the many crevasses, tunnels and swim-throughs back up to the dive boat, moored on the shallow reef. Specific sites to look out for are Grouper Gully, Stewpot, Devil’s Claw and Shark Alley.

What better way to Dive in the Bahamas, than from your own personal yacht with all diving gear on board. Yachts in the Bahamas with Scuba Diving