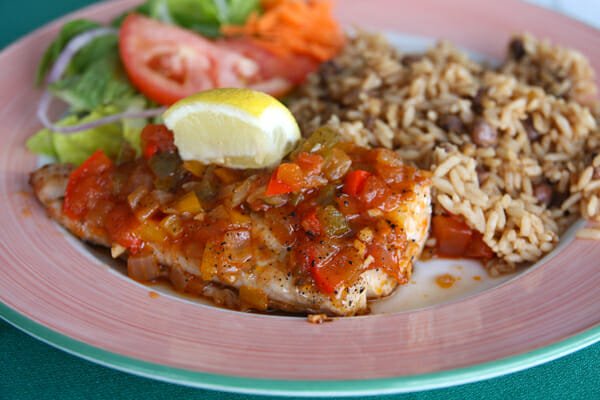 Traditional Foods and Drinks of the Caribbean (A-B)

This is the first in a series of articles celebrating the unique culinary specialties of the Caribbean Islands.

The islands of the Caribbean have storied pasts and while there are similarities, each island nation is influenced by the distinctive cultures that are a part of its history. Because of the diverse groups of people who settled there, each island of this region has a unique history and culture that influences the cuisine. Since chartering a yacht is an adventure, why not be an adventurous diner and sample some of the extraordinary local dishes that celebrate your charter destination’s uniqueness.

Anguilla
Anguilla, which means eel in Italian, was originally settled by Arawaks who migrated there from South America. The English arrived in the seventeenth century and after several struggles with France, a large group of Irish colonists eventually settled the island and Anguilla is still a dependent territory of Great Britain. While it was not a large producer of sugar, the slave trade, resulting from the plantation system in nearby countries, brought in many African descendants as well.

Anguilla’s arid climate and poor soil prevent much farming or livestock production so most meat is imported and seafood is more pronounced here than other Caribbean countries with access to livestock. Still, this country produces small quantities of the usual suspects of the region; chicken, goats, citrus fruits, garlic, and pigeon peas which (along with rice) is the national dish.

For a fresh typically Anguillian meal, try the Callaloo also known as Caribbean spinach. This leafy vegetable originated in West Africa and is chopped and sautéed with onion, garlic and herbs, then enhanced with the addition of okra and pumpkin. It is a delicious accompaniment to fresh fish. To wash it down try the “local” beer, AXA Ale, which is owned locally but the beer is made in the USA and shipped over because of the shortage of clean water on Anguilla. If you want something more potent, try a BB & C which consists of Baileys Irish Cream, banana, and coconut; blended and served very cold, ideally frozen.

Antigua and Barbuda
Long before the Arawaks arrived in Antigua, the Siboney or “stone people” inhabited this island and left many handsomely designed shell and stone artifacts. Like Anguilla and many other Caribbean nations, in addition to endemic persuasions, the influence of the slave trade and European colonization are evident in their culture, including cuisine.

The national dish of this independent island nation is Fungee and Pepperpot, a melange of African, Guyanese, and Caribbean influences. Fungee is a type of bread ball made with ground wet cornmeal (like grits or polenta), mixed with boiled okra. This is served alongside Pepperpot, a stew made with whatever meat or seafood is available and cassareep, a sap from the roots of the cassava plant. This dish is for truly brave gourmands as cassareep root is poisonous if not prepared and cooked properly. For less daring diners, yams may be substituted for the cassareep. If you are into craft beers and would like to try the locally brewed lager, pop open a Wadadli Beer, whose name is taken from the indigenous name of the island.

If you’d rather enjoy a locally inspired cocktail, there are several options including Uncle Roddy’s Barbuda Smash made with Angostura bitters, coconut, cointreau, rum, lime, and pineapple juice. What makes the drink special is the inclusion of the juice of the black pineapple of Antigua, solely cultivated on Antigua and considered to be the sweetest in world.

Aruba
Just off the coast of South America, Aruba was first settled by an Arawak tribe from Venezuela and then Spanish and Dutch exchanged control trying to protect their salt supplies. The British also controlled the island briefly until the Dutch took final claim in 1816. With Dutch and native populations working together, farms and cattle production flourished and influenced the cuisine of this very diverse constituent country of the Kingdom of the Netherlands.

Fittingly, as Aruba is a blending of many cultures, their national dish, Keshi Yena is a casserole of leftover meat (ground beef or chicken), cooked with onion, tomato, green pepper, olives, capers, raisins, and piccalilli stuffed into the rind from Edam or Gouda cheese and baked until golden and bubbly. For dessert, try some pan di bolo, a type of traditional Aruban bread
pudding.

For a unique Aruban cocktail taste something made with Coecoei, a red hued liquor made using an age-old native Venezuelan recipe combining agave nectar, rum and cane sugar. Coecoei is an ingredient in the most famous cocktail on the island, the Aruba Ariba, which also contains vodka, rum, creme de banana, and orange, cranberry, and pineapple juices. For a
local beer, sample the all-malt pilsner, Balashi Beer, which translates to near the sea in the local native language.

Bahamas
While the archipelago off the southeastern coast of Florida is not actually adjacent to the Caribbean Sea, Bahamian cuisine shares similar cultural influences with its Caribbean neighbors including a pronounced creole heritage. Additionally, the culinary style of the Bahamas is shaped by American southern cooking, passed down from African ancestors.

For a truly Bahamian dining experience, taste any dish made with the national food of the islands, conch. The meat of this spiral shelled mollusk is firm and white with a chewy texture that, after removed from the shell, is tenderized somewhat by pounding.

Some of the most popular ways to enjoy this shellfish are Cracked Conch, where the conch is pounded into a cutlet, breaded, deep fried and served in a curry or creole sauce; Conch Salad, a zesty blend of citrus, hot peppers, diced vegetables and chopped conch; and Conch Fritters, small pieces of conch meat mixed into a batter of flour, egg, milk, a variety of peppers, onion, celery and garlic, served with a spicy Calypso sauce.

To wash down all of that conch, try a Switcha, the Bahamian term for lemonade, but because of easier access to limes, is usually more of a limeade. For something stronger, throw back a Kalik, the local beer brewed in Nassau, or for a craft style beer try something from Pirate Republic Brewing Company. For uniquely Bahamian cocktails, enjoy a Goombay Smash, made with rum, pineapple juice, and coconut; or the more potent Bahama Mama, made from a variety of rums, grenadine, orange, lime, and pineapple juices.

Barbados
This eastern most Caribbean island was named Los Barbados, meaning the bearded ones after its bearded native fig trees, by the Portuguese who came to Barbados en route to Brazil back in the sixteenth century. Then, like many of its neighbors, came British colonization, sugar cultivation and exportation, and slavery. Now an independent island nation and member of the British Commonwealth, their cuisine is a blend of African, Portuguese, Caribbean, Irish, Creole and British traditions.

For true local flavor, try the national dish of Barbados, Cou-cou and flying fish, a time-honored fish stew recipe that includes a uniquely Bajan chopped seasoning blend made with scotchbonnet peppers, onions, garlic, ginger, thyme, lime, vinegar, salt and pepper. The seasoning is added to a savory fish stew and spooned over cou-cou; ground cornmeal, water, okra, onion and thyme. In Barbados this dish is traditionally served on Fridays and utilizes the flying fish, a Bajan national symbol.

Beverages that are unique to Barbados include: Mauby, an unusual drink made by boiling the bark of the Mauby tree with cinnamon, orange peel, nutmeg and cloves; locally brewed Banks Beer or rum barrel aged 10 Saints Beer; and since Barbados is the “birthplace of rum,” anything made including a local rum.

For more extraordinary local dishes that celebrate the uniqueness of each Caribbean Island, check out the additional upcoming articles in this series.

Ready to experience these dishes on your next vacation? Find your perfect Yacht Charter.