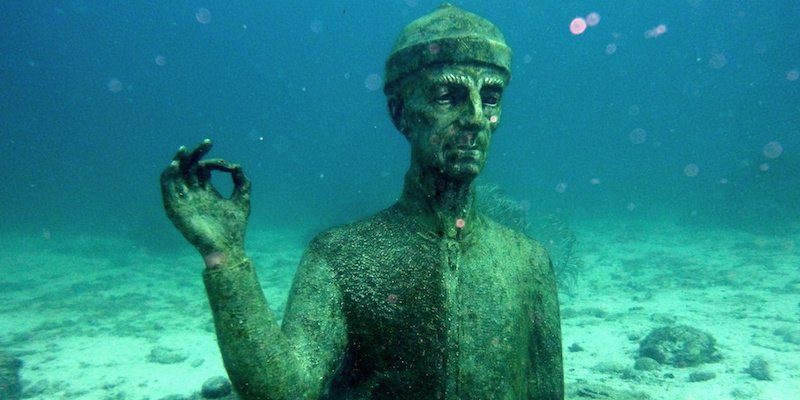 Published on December 7, 2020 by nickpuk

Although the legendary underwater pioneer Jacques-Yves Cousteau died in the late twentieth  century, his influences in the diving world are ongoing and he significantly shaped the scuba  scene in Guadeloupe. The famous oceanographer discovered the remarkable beauty of this  French archipelago in the late 1950s while testing a small exploration submarine. The vessel  was damaged during a trial dive and while waiting for repairs, the research team dived the area  around the Ilets Pigeon off the west coast of Basse-Terre. Cousteau was so enamored with  Guadeloupe that he later filmed a documentary there and urged the government to establish a  protected marine reserve.

Some of the best diving in the Caribbean is within the National Park of Guadeloupe, also  known as the Cousteau Marine Reserve. Because of its abundance of sea life and ease of  access, it can get very crowded during peak dive season. There are several options for all  ability levels within the park located just off the coastal village of Bouillante, on Basse-Terre.

After his death, a bronze statue of Captain Cousteau was commissioned and in 2004, to honor  his contributions to oceanographic exploration, it was submerged in one of the most  approachable sites, the Coral Garden. Just ten feet below the surface, a variety of colorful coral  heads introduce the diver to a gentle slope down to Cousteau’s statue at about 40 feet. After  swimming past the likeness of this storied diver, another 20 feet down a plethora of fish school  along the wall in the moderate currents.

Another picturesque dive site around the Ilets Pigeon is The Pool, likely named because of the  bright white sandy bottom and clear turquoise waters of this lagoon. The reef is teeming with sea life and at about 90 feet down, black coral lines an underwater valley which is home to barracudas and lion fish. As you ascend, keep a sharp eye out for a variety of colored  seahorses. Just across the Ilet to the north is The Aquarium dive site with multiple levels of  reefs hiding spiny lobsters and large spider crabs. More advanced divers can swim past  enormous barrel sponges at about 150 feet below the surface.

There are also several additional dive sites in the Cousteau Marine Reserve located closer to  the coastline. At the northern end of the reserve off of its black sand beaches, Pointe Malendure is a shallow dive between 15 to 45 feet deep with large rock formations and an  abundance of reef fish. The Japanese Garden, averaging 35 feet deep, is a picturesque dive featuring sponges, sea fans and soft corals while Pointe Mahaut, close to Pointe Noir, is home  to an abundance of brightly colored reef fish. Yet another option in this area is Pointe Lézarde,  slowly sloping down to 120 feet and then dropping off sharply. The evidence of the geothermal  activity that creates the hot springs in this area are very notable here.

For an alternative to reef diving, just off of the Ilets Pigeon there are three shipwreck diving  sites. The Gustavia, an abandoned ship that was destroyed during Hurricane Hugo, is located  in about 120 feet of water and provides shelter to several garden eels. For less advanced  wreck divers, the Franjack is a former sand transporter that was intentionally sunk in about 70 feet of water. This wreck is home to many varieties of sponges and fish as well as green sea  turtles. The third wreck, the Augustin Fresnel II, requires advanced reservations and advanced  certification to access. Once stationed just off Pointe à Pitre, this lighthouse ship was sunk as a  safety precaution during hurricane season off of the Ilets Pigeon in about 80 feet of water with  the goal of developing an artificial reef research area. Divers are able to penetrate this wreck  and swim throughout its interior rooms.

While the waters in the National Park of Guadeloupe provide the largest concentration of scuba  diving, there are also less crowded and still spectacular dive sites off of other islands in  Guadeloupe. For example, off the northern coast of Grande-Terre, near Port-Louis in about 70  feet of water, The Plane site is an enjoyable dive aptly named because it is a sunken airplane  formerly used to transport bananas to and from Guadeloupe. The flora and fauna that have  developed around this wreck are both scenic and plentiful. Also in this area, The Arches,  affords divers a labyrinth of rock arches, swim-throughs, and caves at about 80 feet below the  surface.

Notable dive sites off the coast of Marie-Galante Island include Le Petit Cable, Tâche à Cat,  and Les Zélingues. Petit Cable, named because it requires mooring to a small electric cable  that is no longer in use, is a 40 to 60 foot decent to a beautiful plateau scattered with sandy  spots off of Saint-Louis, while Tâche à Cat is closer to the south-eastern shore and divers can explore coral heads, sandy areas, and patches of seagrass. North of the Bay Saint-Louis, Les  Zélingues is a long unspoiled coral garden with plentiful marine life.

One of the premiere off-shore diving locations in the Caribbean, Le Sec Pâté lies between 50 to  over 900 feet deep in the waters between the Ile des Saintes and Grande-Terre providing a  variety of settings in a single location. In spite of the currents and swells, this area of coral  reefs, walls, and pinnacles is one of the best dive sites in the Caribbean Sea.

After touring some of the many dive sites in Guadeloupe, it is evident why Captain Jacques Cousteau was mesmerized with this island archipelago. The variety of scuba diving available  for all skill levels is both remarkable and abundant. Guadeloupe is a top destination for sailors  because it offers some of the most scenic vistas in the Lesser Antilles both above and below  its clear aqua waters.